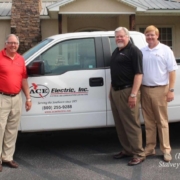 “Being raised on a farm, you can never be behind,” company founder and CEO, Tom Stalvey, remarked. “The electrical business is really not that different. We have to schedule our work when it’s most convenient, and it’s most convenient when you are working ahead not behind.”

That forward thinking culture resonates throughout the company,and has helped Ace Electric position itself as an innovator in the electrical industry. Quarterly, Ace exchanges ideas with a peer group of half a dozen non-competing electrical contractors across the nation on best practices, problems and solutions.

“At the end of the day, we all do the same thing; we run pipe, pull wire and install light fixtures,” said Bobby’s son and company vice president, Rob Stalvey. “The peer group helps us stay on the cutting edge of what is happening in other parts of the country and keep ahead of the curve here in the Southeast.”

Staying ahead of the curve while maintaining the company’s founding principles has made Ace Electric a leader in the region, taking on projects from schools and hospitals to parking decks and interstates.

“I’m proud of the integrity of the company,” Rob remarked. “We’ve heard our competition say that Ace is a good competitor. We have a great reputation in the industry and in the Southeastern United States.”

That reputation was not established overnight. For 40 years, the company has built a team that buys into the company culture. “When I look at where we are today, I know Feature Business By Kelly Naranja that the reason we are as successful as we are is because of our people,” Tom said. “I’m proud of our employees and where they’ve positioned our company.”

Much of that positioning has been built into the structure of the company. Employees are set up for success through programs like Ace’s extensive apprenticeship program that requires 8,000 hours of on the job training. According to Rob, “We want to hire people with good work ethic, put them through our apprentice program, pay them a fair wage and keep them forever.”

Rob and his cousin Tommy, Tom’s son, started earning their keep at Ace while in middle school, spending summers sweeping the floors in exchange for some spending money. In high school, they took on more responsibility, and eventually were working on the service trucks. Rob joked that when they weren’t cutting grass at home, they were learning the family business. Together with their fathers, the sons are now co-owners of the multi-million dollar company.

“We’ve been carefully integrated into Ace, working in different areas every couple of years so we understand how all of the pieces fit together,” Rob said. “Eventually, the goal is for us to know enough about all the pieces to be able to run the company.”

What will the future of Ace Electric look like? To the Stalveys, it’s a continued focus on people and innovation. By recruiting the right people and then developing them, Ace Electric has become an employer of choice for skilled craftsman graduating from programs like the one at Valdosta Tech.

The company rewards its employees with opportunities to change positions and grow in the business. That growth fosters innovation, and in an industry that as a whole lags in innovation, Ace has managed to maintain focus on its founding principles while expanding not only in staff but in complexity of assignments. “We tend to see trends in construction start out West and move eastward,” Rob said. “Take solar for example. Two or three years ago, solar power out there was about where it is here today. We are hoping to get in on the ground floor of the East Coast boom in solar.”

Getting in on the ground floor is something that Ace Electric has managed to do very well. The company has strategically grown from two to 260 employees over the past 40 years, now dividing their staff among two locations on Inner Perimeter Road.

Tom laughs recalling the move from Ace’s headquarters on the Stalvey family farm in northeastern Lowndes County to their second location on Janet Drive. It was a Saturday afternoon and Tom and Bobby had been moving material from the farm to the new location all day. They took a break to sit in one of the offices. “I don’t remember who said it, but it was said,” Tom recalled. “‘We won’t ever outgrow this place.’”

Several years later, they moved everything again to the building on Inner Perimeter and in 2008, corporate headquarters was established just down the road. As the buildings have expanded and grown, so too have the people, including Tommy and Rob.

“What excites me about Ace is being able to watch [Tommy and Rob] as they start making the decisions,” Tom said.

So you’re okay with giving up the reins?

“Absolutely. I have all the confidence in the world.”

This site uses cookies. By continuing to browse the site, you are agreeing to our use of cookies.

We may request cookies to be set on your device. We use cookies to let us know when you visit our websites, how you interact with us, to enrich your user experience, and to customize your relationship with our website.

Click on the different category headings to find out more. You can also change some of your preferences. Note that blocking some types of cookies may impact your experience on our websites and the services we are able to offer.

These cookies are strictly necessary to provide you with services available through our website and to use some of its features.

Because these cookies are strictly necessary to deliver the website, refuseing them will have impact how our site functions. You always can block or delete cookies by changing your browser settings and force blocking all cookies on this website. But this will always prompt you to accept/refuse cookies when revisiting our site.

We fully respect if you want to refuse cookies but to avoid asking you again and again kindly allow us to store a cookie for that. You are free to opt out any time or opt in for other cookies to get a better experience. If you refuse cookies we will remove all set cookies in our domain.

We provide you with a list of stored cookies on your computer in our domain so you can check what we stored. Due to security reasons we are not able to show or modify cookies from other domains. You can check these in your browser security settings.

We also use different external services like Google Webfonts, Google Maps, and external Video providers. Since these providers may collect personal data like your IP address we allow you to block them here. Please be aware that this might heavily reduce the functionality and appearance of our site. Changes will take effect once you reload the page.